When I saw the trailer for this movie, I cried through the entire thing, because it is the place from where I live my life. I believe our animals travel with us throughout our lives. Since they live a shorter time than we do, they come back in different bodies. They have things to teach us, and things to learn. We are there for them, and they for us.

I bought the book. And then when the movie was released, I hesitated. Not because of some controversy surrounding a bad trainer who was fired – but because I didn’t want to spend two hours sobbing.

I finally went to see the film, by myself, during a trip to my hometown to see my ailing mother. It was just what I needed. It reaffirmed my belief system for me, gave me joy, and yes, I shed a few tears. They were tears of love, recognition, and happiness.

The film attempts to take an “out there” subject and make it palatable for the majority of people. It can be fantasy, or in my case, it can hold a deeper meaning.

Ya wanna be the horse or the human??

the human on some of those turns around the cosmos. I’ve been told that my beloved horse Wilma and I regularly trade horse/human guises as we travel together. I’m pretty sure I was the horse the last time around; I walked like a horse, and could feel what it felt like to be a horse, for years when I was a kid. Eventually the memory faded and I became more human, but it sure begs the question – where did that come from?

In the end, A Dog’s Purpose advises that the reason for life is to be in the moment – savoring, enjoying, experiencing what is in front of us, right here, right now. I like that. Watch your animal friend. See how they are so in the moment. They don’t miss a second of it. Instead of dwelling on the past or fretting about the future, we would do well to embrace that concept: Be. Here. Now.

Power to the Animal 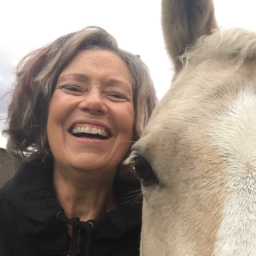